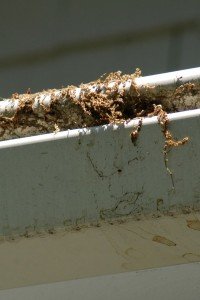 Gutter guard comparisons should include looking at the underside of curve systems for oil build up, as can be seen here.

Let’s face it, gutter guard comparisons are not all created equal. We know, we work with Alex Higginbotham, the industry innovator of microfiltration for a gutter guard and he’s got pretty strong opinions of most tests. While his technology has topped many of the recent independent tests, he’s found the methodologies not particularly relevant (for example, the poke-it-with-a-pen test) or don’t mirror most real-world conditions, which can skew results (for example, few homes in North America are built with a low pitch roof as tested by a consumer magazine. Alex will tell you most gutter guards will perform well under these conditions).

Good comparisons should start by testing consistent amounts of debris types on different systems. Pine and fir needles, for example, two completely different types of conifer needles with very different characteristics must be kept out and also shouldn’t build up on the gutter guard surface. The same applies to spring debris that most trees drop when they start to bud. They may drop oak tassels, maple, elm or ash helicopters, seed husks, you name it. Whatever it is, it tends to be on the small side, the type of material that can get through the openings of most systems. Other debris types? Test with leaves of course, as well as acorns and twigs.

Any system with wide openings may work reasonably well with debris—when the weather is dry. Once it rains, it’s a different story. Certain designs trap and let debris into the gutter. Once leaves or debris gets wet, it will cling to whatever surface it is on. Debris will get pushed or carried forward in rainwater, following the path of the roof and then the gutter guard. In the case of curved systems, that means a lot of debris follows the curve and gets into the gutter below.
Click for a Fast, Easy & Pressure Free Estimate!

One institution, in their comparisons, gave simple plastic mesh a “best buy” nod. Go through one spring after investing in one of these systems and you probably won’t agree. That’s because it’s the small stuff that gets through and into the gutter below. The photo to the right demonstrates this; the picture is untouched. A comparative test should be done with the most common debris types. 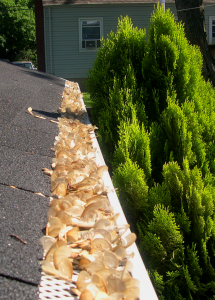 This is why people don’t rely on gutter guards from the big box stores. Is this type of system a best buy like a major magazine said? If you’re under trees that drop small debris the answer is no.

A thorough comparison should also take into consideration asphalt shingle roof oils. This type of shingle is the most common roofing material in North America. The oils that naturally leach from shingles are the second most common cause of gutter guard failure. In fact, Alex Higginbotham’s first product failed because of roof oils so he had to figure out a way to solve the problem, hence he received the first patent for a “self cleaning gutter guard” in 2001.

You can drive around your neighborhood and see the effect of roof oils on guards. Look at the underside of any of the popular curve designs. Can you see a dark build up forming under the curve? That’s the oily residue that mixes with dirt, pollen and anything else that washes off a roof in the rain. Unfortunately, rain can’t hit this part of the curve to clean it, so an oily buildup is common. A build up here also means water won’t successfully follow the curve into the gutter below. Some of it will wind up flowing off the system and onto the ground below.
Click for a Fast, Easy & Pressure Free Estimate!